You all who know me, know that I am not a good cook. I don't really enjoy it. I even took a cooking class at BYU once in an effort to have 12 credits to qualify for my Pell Grant learn some skills so I would enjoy that aspect of homemaking more.

That really didn't work AND I got a B. Which really ticked me off.

For one year, a few years back, we had a law school family in our ward named Amy and Joe. They were a cute, busy young couple. So cute! But then they moved. Thanks to blogging, we have stayed in touch. About a year ago Amy wrote a post with this recipe. As I recall the story, she was home sick one day, when she was still in high school. Joe, her crush, who would someday become her dear husband, made her these pancakes.

Rachel has just recently discovered true romance and she LOVES that story. She also loves a post Amy did once about how Joseph always gives her a kiss goodnight. Rachel has a whole set of expectations based on Joseph Lee. He once told me I was of "advanced years" but since I live with my foot in my mouth, I understand that he doesn't realize that I am 25 on the inside. 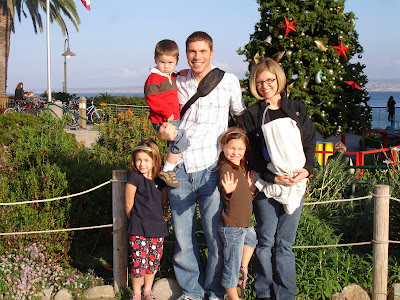 Here's a picture of the darling family. My friend, Sue, will recognize Joseph as the son of her friend from Salem, and the brother of one of her young women, Michal Lee. It's a small world.

Back to not liking to cook - pancakes are right up my alley and I love the weekly occasional breakfast for dinner idea. I also love pumpkin. When the kids asked what we were having they were skeptical. They were scared. They were suddenly not hungry. I made them all try one. My Joseph ate NINE. In short, we all LOVE this recipe! We titled them the AmyJoe Lee Pancakes (which is a play on Amy's middle name, Jo, and her husband's name Joseph. Get it?) or True Love Pancakes which a is a play on the fact that we LOVE them and Joe made them for Amy and that is true love too (let's remember he was in high school!)

Because Sari and Joseph have hollow legs and can eat more in a meal than some small countries do in a day For my size family I times the pancakes by 5 and put the leftovers in a tupperware pitcher to make individual pancakes as liked. I also 2 1/2 times the cider syrup recipe and that seems to be almost the right ratio. We LOVE the cider syrup! I recommend tasting your cider first to determine how much sugar you need to add. Ours was made with less sweet apples than we usually get, so I added the full one cup of sugar. They really do get super puffy and are light as air. If you prefer waffles, like Larry does, just add another egg white or two and a smidge more vegetable oil.

Do NOT wait a year like I did to make these pancakes. Make them NOW. Tonight. Tomorrow morning. But do it soon. You'll be thanking me!
Brought to you by the Sant Family at 10:43 AM

File this under cooking